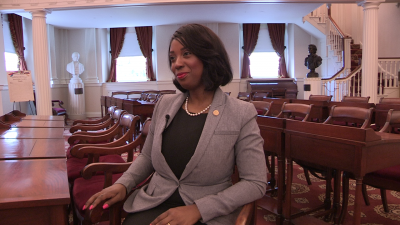 Delegate Lashrecse D. Aird was sworn in January 2016 to represent the 63rd District, which includes all of the City of Petersburg, parts of the City of Hopewell, Chesterfield, Dinwiddie and Prince George County. She holds the special distinction of being the youngest woman ever elected to the Virginia House of Delegates. Delegate Aird has been appointed to serve on the General Laws; Health, Welfare and Institutions; and Appropriations committees.

Delegate Aird’s service is guided by her allegiance to the citizens she represents and her devotion to improving their quality of life. In her first legislative term, she has placed a significant emphasis on education—K-12 and higher education—local governments in fiscal distress and workforce development. Additionally, she has been instrumental in securing millions of dollars for school systems in her district.

Delegate Aird’s professional and civic life reflect her conviction that the struggle for equality begins with political freedom and education. At Richard Bland College of William and Mary, she has a direct impact in helping today’s students become tomorrow’s leaders, as the Assistant Director of Development; raising money for scholarships to make college more accessible and affordable.

A tireless and trusted community leader, Delegate Aird is actively engaged in numerous civic boards and organizations. Through her hard work and clarity of vision, she has risen to a leadership position in each organization that she serves. Currently, she chairs the 4thCongressional District Committee for the Democratic Party of Virginia. In addition, she is Chair of the Petersburg Democratic Committee; a member of the Board of Directors for Southside Regional Medical Center, the Petersburg Alumnae Chapter of Delta Sigma Theta Sorority, Inc., and a former member of the Petersburg Planning Commission and the Governor’s Council onWomen.

Delegate Aird has been recognized with numerous awards and honors, including the Free Enterprise Award from the Virginia Chamber of Commerce and the Virginia Education Association’s 2017 Solid as a Rock Award. She has been named to the Virginia LeadershipInstitute’s Top Ten Leaders under Forty; is the recipient of Virginia State University’sPresidential Medallion; and the Young Trojan Distinguished Alumni Award for two consecutive years.

Delegate Aird is a resident of Petersburg where she and her husband, Blaine, reside and are raising their two young boys, Blaine and Blake.