After a grueling week in the classroom, the class was relieved to hear that we would not need to leave for O’Hill until 8:03 am, on Friday. We had spent the last week staying up past midnight every night and waking up before 7am; more than 7 hours of sleep was a dream come true. After a full-night's rest, we energetically woke up and got ready for the day. After a brief breakfast at O’Hill, we quickly moved to Clark Hall as we had an hour to work on our Policy Proposals before our first speaker of the day. In such a short span of time however, each of the five groups hammered out details and plans for their proposals. During his one-and-a-half-hour interactive presentation, University of Virginia Professor A.E. Dick Howard spoke to us about the ins and outs of the Virginia constitution, as well as his process writing it. He spoke eloquently about his time on the Constitutional Revision Committee and the other important legal historical figures that served alongside him such as Lewis Powell, Mills Godwin, and Oliver Hill to name a few. He spoke about the implications of potential amendments to the United States Constitution, Virginia Constitution and where he personally hoped the document he helped craft headed. Professor Howard also spoke about the importance of the Virginia constitution and other Virginia foundational documents and how it was the basis of many other important documents, such as the US Constitution. He told us how, in the present era, he spends his time teaching law at the University of Virginia, filing Amicus Curiae briefs with the Supreme Court of Virginia, and offering Constitutional law advice to Governors, politicians and other notable figures in politics. Having such a luminary and insightful perspective into the Constitution of Virginia broadened horizons and offered new insight into the world of Virginia politics. As the person who wrote the book on the constitution of Virginia, having such an in-depth perspective on the constitution provided a historical perspective to our teachings from Professors Johnson and Walls.

Later in the day, we heard from James Abrenio, who is a defense and personal injury attorney in Northern Virginia. He told us the tricks to the trade, per se, on how to argue and debate a point successfully. He also shared with us many different ways a law degree is useful for professions dealing with politics or business. Through his experience working on cases as a defense attorney, Mr. Abrenio was able to share personal encounters dealing with a heavily flawed justice system. He spoke on the methods he has taken to help reform the criminal justice system, and how we can have an impact also.

The class was then pleased to welcome Allison Gilbreth, a lobbyist for Voices for Virginia’s children. She walked us through the steps she would take while lobbying the General Assembly for certain legislation to protect the interests of children. She also asked the class questions and asked us to stand on certain sides of the room to represent our positions. She talked about SNAP, TANF and other essential projects and programs offered to serve the interests of low-income families and individuals. Lastly, she described the painful and complex process of foster care and the ramifications of the system on a child’s psychology.

Our next speaker, Kelly Johnson, serves as an outreach representative to Senator Mark Warner. Ms. Johnson attended Virginia Tech and served as the school’s VAYD Chapter President. She walked us through the Senator’s office and the different positions inside the office. She shared stories about her line of work, as she drives around the Roanoke and Shenandoah Valley area to represent the interests of Senator Warner. She also told us the path she took to get her current job and ensured we all knew that life was uncertain and best left to fate.

To conclude our day, we spent almost two hours in a seminar on improving and fixing our resumes and enhancing our employment opportunities, from Natalie Miller-Moore. She gave us great suggestions such as buying a domain name for ourselves and using LinkedIn. These will be incredibly helpful as we move forward in our careers.

In the evening, we worked on our Policy Proposals and quietly prepared in small groups for the Senate Simulation the next day. Overall, today was a very fun and productive day and we can’t wait to see what tomorrow holds for us. 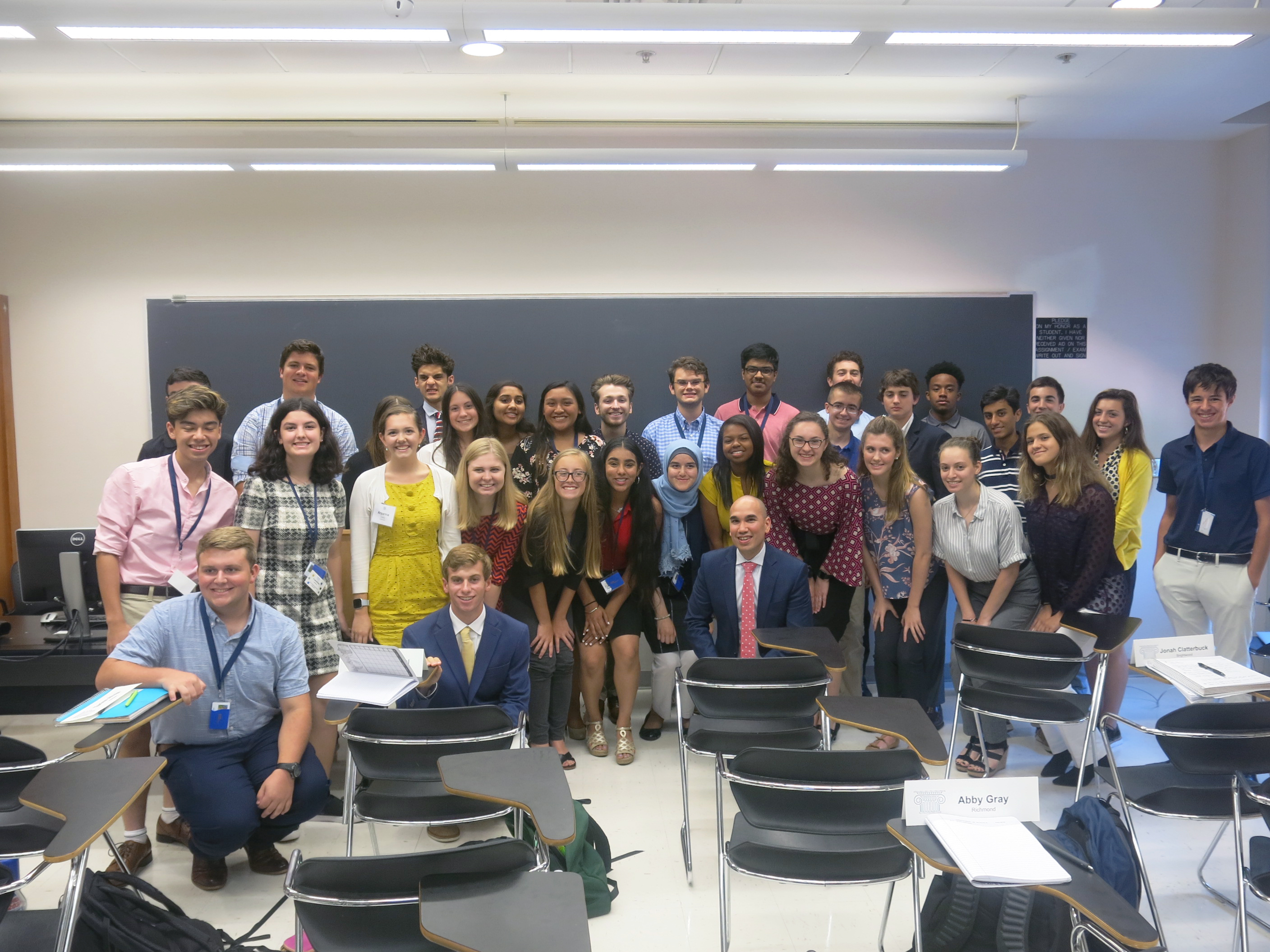